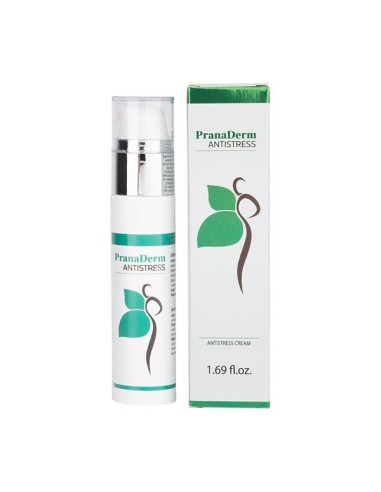 CALIFORNIAN POPPY: This is used in PranaDerm Antistress for its sedative and anxiolytic capacity, which has been demonstrated in experimental models. The European Medicines Agency (EMA) approves its traditional use for the relief of anxiety and as an aid to sleep. The Californian poppy is a plant used widely in traditional medicine as an analgesic and sedative, and is frequently associated with other plants of sedative action (valerian root, St. John's wort, passionflower bud, melissa leaves) for the treatment of neuralgias, neurasthenia, depression, insomnia, sensitivity to changes in time, constitutional lability of the nervous system, headache and other vasomotor dysfunctions.

ELEUTHEROCOCCUS: As one of the most recognized adaptogens, the presence of eleutherococcus in PranaDerm Antistress potentiates the natural mechanisms of adaptation to stress. Eleutherococcus is usually included among plants with adaptogenic action for some of the following properties: antioxidant, immunomodulatory, hypolipidemic and hypoglycaemic. Adaptogens have a generic connotation, referring to the adaptive property for different types of stress; and this is why they cannot be evaluated simply by the sum of their active ingredients, as it is done in conventional science. Antioxidant activity: the aqueous extract has in vitro antioxidant activity in different experimental methods. Stress resistance: numerous in vivo studies demonstrate the protective effect of eleutherococcus under physical and mental stress states. The European Medicines Agency (EMA) approves its traditional use for the treatment of symptoms of asthenia, such as fatigue and feeling weak.

JUNIPER: This is a component of PranaDerm Antistress that acts by improving ancestral energy, due to the cell maturation in the kidney that corresponds to the first chakra, regulating the emotion of fear. To this is added its antiseptic and antioxidant effect. Its best-known traditional use is as a diuretic and antiseptic, although it also has a greater antioxidant effect than even alpha tocopherol (vitamin E). The essential oil has an antifungal effect against dermatophytes and candida, and antibacterial against gram-positive and gram-negative bacteria. Animal studies show an anti-inflammatory and antinociceptive effect for the extracts, which justify its popular use in countries of the Middle East for analgesic purposes. Some indications approved as traditional by the European Medicines Agency (EMA) for gallbladder and essential oil are: urinary tract lavage, as an aid in the treatment of mild urinary tract infections; dyspepsia and flatulence. For the essential oil, it approves its traditional use for the relief of minor muscle and joint pains.

CAMOMILE: This is used in PranaDerm Antistress for its recognized ability to modulate states of anxiety, stress, insomnia and mild depressive states, which affect the colour, tone and dermal cell maturation. It facilitates the induction and maintenance of sleep. Common chamomile also has anti-inflammatory, anti-ulcerous, carminative, digestive, bactericidal and fungicidal action due different active ingredients. It is approved for topical use in inflammations, irritations and skin and mucosal infections, including the buccopharyngeal cavity and the gums (rinses), the respiratory tract (inhalations) and the ano-genital area (baths and ointments). Camomile has shown its usefulness in different clinical studies for the treatment of anxiety, insomnia and mild depressions, as well as in the relief of premenstrual syndrome pains (effectiveness comparable to that of mefenamic acid). It is part of the composition of PranaDerm Antistress for its recognized anti-inflammatory and anxiolytic effects. The usefulness of camomile in digestive disorders also reveals an energetic effect on the solar plexus, of greater importance in the regulation of the emotions.

ROSEMARY: The essential oil by the topical route has a stimulating action on circulation. It is a good antispasmodic and anticonvulsant, in addition to being effective as an antibacterial and antifungal agent against a large number of microorganisms. It is used externally as an adjuvant in the treatment of rheumatic diseases, neuralgias and peripheral circulatory disorders, either the plant directly, its decoction or the essential oil as additives in baths or semi-solid or liquid preparations (e.g. ointments, rosemary alcohol and alcoholic essential oil). It also promotes the healing of wounds and is a mild antiseptic. In traditional medicine, essence of rosemary is used as a stimulant of the scalp. It is often used as a preservative and antioxidant.

THYME: It is used in PranaDerm Antistress as a recognized tonic for the nervous system which helps in the organic processes that regulate the adaptive response to anxiety, exhaustion, stress and depression. To this is added its antiseptic, analgesic and anti-inflammatory properties. Because of its content in thymol and carvacrol, the thyme acts on the bacterial membranes, which may explain its antiseptic action at the oropharyngeal, respiratory and topical levels. In topical application, essential oil of thyme is rubefacient. Due to the inhibitory action of carvacrol and rosmarinic acid on the synthesis of prostaglandins, it has an analgesic and anti-inflammatory effect. This justifies the inclusion of the thyme essence in liniments and other preparations for the treatment of muscular and osteoarticular pain.

VALERIAN: This is used in PranaDerm Antistress because it isone of the oldest and most effective relaxing andsedative plants. Its mild sedative effect has been related to valepotriates, although the complex action of valerian is due to the synergy of several components. It has been used traditionally in the symptomatic treatment of the states of excitability, nervousness, anxiety and sleep disorders of nervous origin. It is useful when there is insomnia due to hypersympathetic and stress states. Several meta-analyses conclude that valerian root preparations can improve the quality of sleep without causing side effects.

No parabens, colouring or synthetic perfumes.

Apply on the skin with a gentle circular massage until its complete absorption, preferably after a shower. Repeat throughout the day if necessary.