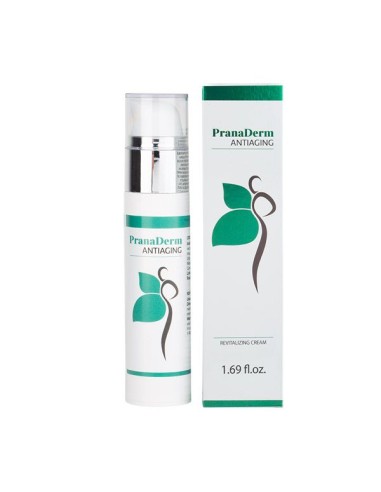 Revitalising cream. Nutrient and dermal revitaliser that stimulates the natural physiological control of the aging processes.

Each component, in detail:

ROSEHIP ESSENTIAL OIL: The concentration of ascorbic acid, which is approximately 40 times higher than in citrus fruits,represents an important antioxidant and nutritional source. Tretinoin provides relevant qualities in the area of cosmetics and dermatology, mainly as an emollient and healing. Within the traditional uses is the healing of wounds, trophic ulcers, keloids, burns, acne lesions and radiodermatitis. In aesthetic medicine, rosehip cream is used to prevent skin aging and to treat skin blemishes. In fact, it was found that transretinoic acid causes significant changes in the keratinisation process, with an increase in epidermal regeneration rate; hence its use for treating aged skin. This acceleration in keratinocyte differentiation allows the return to a more flexible epidermal structure and a thinner corneal layer that makes the granular layer more visible and allows a normal distribution of the pigment to avoid its accumulation in the basal keratinocytes. In a clinical trial performed on women.

GRAPE SEED OIL:  Its topical use is recognized for its antiaging effect: revitalising, regenerating, softening and moisturising the skin. Resveratrol, contained in this oil, is one of the substances that has been most studied for its effect on cellular revitalisation. Ingestion of grape seed extract can neutralise the free radicals that contribute to the premature aging process of the skin. The University of Maryland Medical Center highlighted in a study that grape seeds can also safeguard elastin and collagen in the skin and fight the aging process. Grape seed oil is rich in oleic acid (omega 9 series) and linoleic acid (omega 6 series) which, together with the content of protoantocyanidins, vitamin E and resveratrol, confers nutritional and antioxidant properties with an antidegenerative effect. Its anti-free radical, anti-inflammatory, vascular protection and metabolic regulation effects can account for the remarkable protective action of the delicate mechanisms that maintain the health of the skin. In addition, in this PranaDerm formula, soy lecithin phosphatides improve the bioavailability of grape seed polyphenols in tissues. The proanthocyanidins in grape seeds trap hydroxyl free radicals that oxidise DNA and essential fats and thereby prevent premature aging processes.

LAVANDER: It is used in PranaDerm Antiaging for its synergistic effect with the other components, contributing to the process of regulating anxiety and stress, which produce vasoconstriction and decrease the nutrient supply through the microvascular dermal network. The European Medicines Agency (EMA) has ruled that both flower and essential oil are traditionally used to relieve mild symptoms of mental stress and exhaustion, and to help sleep. ESCOP approves it for the treatment of mood disorders such as restlessness, agitation and insomnia. It also indicates its usefulness in cases of functional abdominal discomfort. There are several clinical studies that evaluate anxiolytic efficacy in patients undergoing certain anxiogenic situations.

YARROW: This has anti-inflammatory, antispasmodic, antibacterial, choleretic, appetite stimulant and astringent effects. These are due to the different components of this plant, among which are sesquiterpene lactones, azulenes, flavonoids, caffeine derivatives and tannins. In animal tests with gastric ulcer, oral treatment with hydroethanolic extract of Achilea millefolium significantly regenerated the gastric mucosa, similar to omeprazole. This effect has been attributed to the antioxidant activity of the extract, due in part to the flavonoids. For the synergistic effect with other components of PranaDerm Antiaging, Yarrow reinforces the anti-inflammatory, antioxidant and healing effect, which is of great importance in curbing the premature aging of the skin.

SOY LECITHIN: Soy lecithin promotes the absorption of fat-soluble vitamins (some important examples are vitamins A, E, D and K). This fact is also closely related to its excellent properties in caring for the skin, keeping its elasticity and hydration and preventing its aging. In the context of this PranaDerm, its usefulness is understood by the phospholipid component that acts on the cellular membranes of the skin. Thus, its isoflavone content can compensate locally for xerosis and postmenopausal dermal atrophy.

HYALURONIC ACID: This glycosaminoglycan is not only the basic substance of the cartilage, but also an important component of connective tissue, rich in collagen. An optimum supply not only favours a smooth skin, but also healthy nails and hair. Hyaluronic acid is used in dermatology and aesthetic medicine as a skin regenerator and for the treatment of wrinkles and implants. It mainly exists in the joints, the cartilages and the skin. It has the property of stimulating the production of collagen and water retention, forming the protective pad on the joints or moisturising the epidermis. It also acts as a lubricant in joints and is used in osteoarthritis and osteoarthritis, as well as for wrinkles and aging skin. Similarly, by acting as a moisturiser, it increases the thickness and volume of the skin; thus helping to diminish and attenuate the furrows in the skin that appear over the years. Hyaluronic acid can also eliminate free radicals, tissue-damaging by-products derived from oxygen metabolism, which can lead to inflammation and degenerative diseases.

TOCOPHERYL ACETATE: Tocopherol acetate does not oxidise and can penetrate through the skin into living cells, where about 5% is converted to tocopherol, which provides beneficial antioxidant effects. As a supplement, tocopherol acetate can help treat and prevent a deficiency of vitamin E, a fat-soluble vitamin, whose primary role is to prevent the oxidation of polyunsaturated fatty acids. Vitamin E reacts with oxygen free radicals, which are responsible for the oxidative damage of the fats of the cell membranes, preventing the formation of other free radicals in the process. It has the capacity to prevent solar erythemas (reducing the inflammatory process and the increase in vascular permeability), as well as the formation of cutaneous spots of lipofuscin. It also has a moisturising effect on the skin. These antioxidant and moisturising activities explain how it can improve the appearance of aging skin, its wrinkles and its dryness, and is indicated for skin aging. It also has a protective effect on degenerative damage to connective tissue (elastosis and loss of functionality of collagen fibres). It is also attributed to tocopheryl acetate to provide protection against ultraviolet rays from the sun.

COENZYME Q10 LIPOSOME: Coenzyme Q10 is also known as ubiquinone, a term derived from the word “ubiquitous”, meaning “found everywhere”. This is due to the fact that this substance is found in all the cells that make up the body, where it is responsible for promoting energy production, protecting the skin from external aggression and retarding aging.` It is worth noting that the amount of coenzyme Q10 is reduced with the passage of time which, coupled with the decrease in collagen and elastin proteins, leads to wrinkles and dryness in the epidermis. The cells that make up the human body need coenzyme Q10 to produce energy and fulfil vital processes, and to do this they take advantage of the foods that are supplied through the blood. These results in the formation of a substance called adenosine triphosphate (ATP), which is the “fuel” behind the chemical reactions in an organism. All this happens in the mitochondria (a component of the cells), and this is where coenzyme Q10 is concentrated. Its presence in PranaDerm Antiaging promotes the production of mitochondrial energy, which is important in preventing the degeneration and aging of all tissues, including the skin.

NICOTINAMIDA: Nicotinamide, also known as niacinamide, is the active form of vitamin B3 or niacin, whose deficiency leads to a disease called pellagra that has manifestations in the skin. Nicotinamide is a precursor of NADH and NADPH, which are involved in vital energy production processes and therefore in the multiple functions of the body and skin. Niacin also contributes to the normal energy metabolism and functioning of the nervous system, the normal psychological function and maintenance of mucous membranes and skin under normal conditions. In PranaDerm Antiaging it provides nutritive, energetic and rubefacient properties, which improve the quality, vitality and turgor of the skin.

No parabens, colouring, or synthetic perfumes.