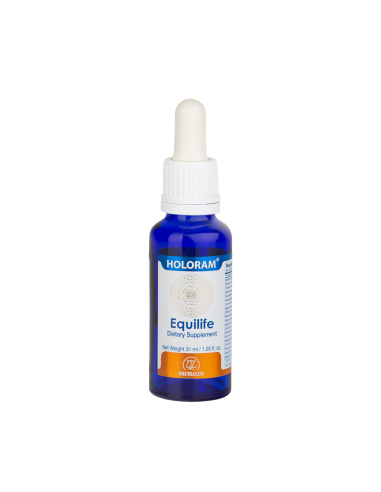 Global Bio-regulator of the vital energy

HoloRam® Equilife is a regenerator of the vital energy (Chi or Prana) which improves and completes the actions of each of the other supplements of the HoloRam® Line.

It promotes restoration of disrupted homeostasis, and promotes the preservation and strengthening of the harmonic balance of the biological systems. Therefore, its aim is also wellbeing and health promotion.

It supplies a global adaptogen effect which induces the balance in the transfer of information among the key systems involved in biological regulation. It also promotes a highly restoring action against energy imbalances which are at the origin of most of the functional and organic disorders.

It is suitable to ease an integral adjustment of the nervous, immune, endocrine, and metabolic systems by favoring energy production and toxin excretion processes.

Holoram® Equilife is specifically suitable for the activation of chi or vital energy, favoring its assimilation, preservation and circulation within our organism. It has been produced with a complex extract of main adaptogens, Ayurveda plants, phytonutrients, mushrooms, essential oils, trace elements and micronutrients activated and invigorated by bio-physic procedures. This way, it provides a multisystemic pattern of information, in harmonic resonance with all the other products of the Holoram® Line.

Holoram® Equilife’s components have been carefully selected to produce the activation of the information processes that regulate the harmonic energy coordination among all the biological systems thanks to the synergy of their activity. This regulation is essential for the promotion and maintenance of an integral health. Each of these adaptogens has a systemic action that involves the harmonic regulation of multiple functions, due to their entire composition in addition to the particular effect of each component.

In Holoram® Equilife we have synchronized different extraction techniques. The extraction of the concentrated active principles has in addition the extraction of non-volatile principles. This set is activated and invigorated biophysically to generate a resonance with other components of the HoloRam® system.

Holoram® Equilife can be used alone or as a harmonizer that complements one or several of the other nutraceutical products, especially those of the Holoram® Line. It can also be used as carrier of customized energy stimulus in the vibrational praxis, flower essences, homeopathy, etc. Is very useful in the field of Sintergetica, where its action is customized by the use of vibrational auto-nosodes.

Dietary supplements must not be used as substitutes of a varied and balanced diet. Do not exceed the recommended daily allowance. Keep out of children’s reach.

HoloRam® Equilife uses the synergy of some of the most complete and valued natural adaptogens.

For a better understanding, we have grouped their components into six categories:

- Group II: Ayurveda adaptogens: Ashwagandha (Withania somnifera) and Haritaki (Terminalia chebula). These are two traditional Ayurveda pillars which have been used for many years to find the equilibrium in many organic functions.

- Group III: Other adaptogens phytotherapeutics: Angelica (Angelica archangelica), Burdock (Arctium lappa), Lemon balm (Melissa officinalis) and Sage (Salvia officinalis). Thanks to their multisystemic action, these are the true orchestra conductors of the vital energy system. The indications of angelica and burdock show a broad action spectrum, characteristic of adaptogens. Angelica has been used for anxiety, insomnia, lack of appetite, flatulence, gastrointestinal spasms, asthma, migraines, dysmenorrhea, etc. Both roots and leaves, are used in the production of some complex recipes of famous liquors such as Chartreuse and Benedictine. As a matter of fact, Paracelsus designated lemon balm water as “Life elixir”. It was also part of the famous tonic water “Agua del Carmen” prepared by French nuns in 14th Century. Traditionally, it has been used as sedative, analgesic, antispasmodic, neuro-muscular tonic, carminative, choleric, digestive, appetizer, antiseptic, antiviral and cicatrizing. Sage has bactericidal, healing, antiseptic, emmenagogic, antispasmodic, antidiarrheal, anti-fungal, carminative, anti-inflammatory, hypoglycemic, relaxing, diuretic and antiperspirant properties.

- Group IV. Adaptogens of nutritional value: Maca, Reishi and Shiitake: Maca has a privileged composition in amino acids and minerals that reinforces the micronutrients which induce the metabolic balance present in Holoram® Equilife. Given its potential to survive in extreme weather conditions, it provides privileged adaptogenic information, which is why Maca is an inducer of the regulatory information for the adaptation to stress. Reishi (Ganoderma lucidum) and Shiitake are two of the most recognized mushrooms due to their medicinal value, as well as their high nutritional value. Traditionally it has been used in Orient thanks to its adaptogenic properties which increase vitality and longevity; and boost the immune system. Reishi is also used in infectious, inflammatory and degenerative problems. It is especially valuable for modulating the immune system, thanks to its content of Beta glucans.

Take 15 drops twice or three times a day diluted in half a glass of water or juice in the morning and at midday, best before meals or according to a specialist’s advice.