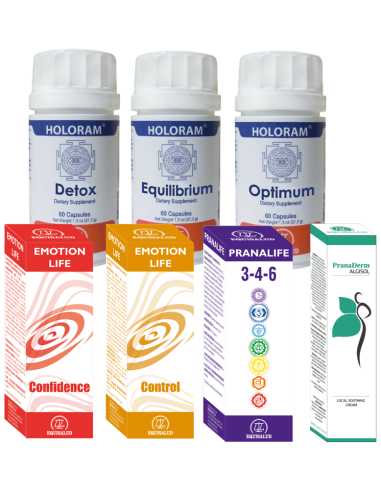 Although its final expression involves molecular alterations, allergies can involve exposure to chemical, energetic, emotional and even mental stimuli. All these involved levels imply that in allergies there may be food, digestive, electromagnetic and psychic components that have to be taken into account globally to obtain a modulation of the allergic response. The allergy kit seeks the harmonization of cellular immunity frequently affected in the allergic response, the elimination of toxins that facilitate or trigger the balance of the stress response systems, the control of the emotions most frequently involved and the improvement of the local inflammation and itching.

HoloRam Optimum. It favors the bio-regulatory mechanisms of humoral and cellular immunity frequently unbalanced in the allergic process.

HoloRam Detox. Activates the regulatory mechanisms of free antiradical systems and drainage of toxins that are frequently altered in allergic processes. Some allergies are in reality a defensive response of the organism to the presence of toxic elements.

HoloRam Equilibrium. It is aimed at improving the adaptive response to physical or psychic stress that is altered in the allergic processes.

Pranalife 3-4-6. It is the energy regulator of the metabolic response linked to the third and vascular center related to the fourth center or cardiac plexus. Both systems are widely involved in the allergies.

EmotionLife Confidence. Sustained fear is often a facilitator of allergic processes due to an alteration in the vegetative and adrenal regulation. The consequent decrease in endogenous cortisol favors the appearance of allergies and immune processes. EmotionLife Confidence facilitates the endogenous regulatory processes that allow restoring the feeling of trust and internal security.

EmotionLife Control. It favors the processes of emotional transmutation that allow the liberation of anger, resentment, bitterness, and related emotions that disturb the third center of energy or solar plexus. These negative emotions contribute to the genesis of reactions of psychic and physical intolerance that can ultimately turn into allergies.

PranaDerm Algisol. It contributes to the activation of endogenous processes of decongestion and reduction of inflammation, commonly associated with allergies. It can be applied locally or on palms, plantar and auricular pavilions, practicing a soft massage.